Songs & Sonnets by Jim Morrison is an original stage play/musical that celebrates not only the music of the Doors but the poetry and passion that powered their music, along with a jubilee of the times that helped to shape our today. 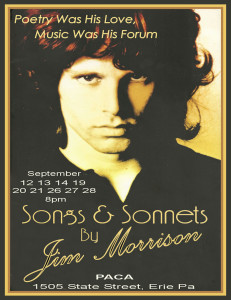 The entire 3-week run of the show will feature after parties and receptions with many of the best local musicians and your favorite bands, along with film and other artistic presentations to be announced soon.

The entire month long cornucopia of theatre, music, art, poetry and film will not only expand your mind and enrich your senses but will also keep your toes tapping, your fingers snapping, and offer a rock n’ roll experience at full throttle warp speed to the ends of the universe.